Hazing has always been a prominent issue on college campuses and we have seen it persist on campus for several reasons. First, many groups are sometimes oblivious to the fact that their initiation practices are actually hazing. Also, those subjected to initiation activities may not question them because they are handed down by older members who often went through similar experiences. In addition, organizations may ignore the possibilities of harm and consequences because of a belief that they are fostering loyalty and bonding. The University of California, San Diego takes the issue of hazing very seriously. The practices of hazing are a clear violation of the Student Code of Conduct and California law. Thus, it was very important for the UCSD sports clubs department to establish a clear and concise hazing policy relative to sports club activities.

“Luckily, there was no situation with one of our sports clubs teams that made us create our hazing policy. There wasn’t a single act that made us more aware of hazing and what it can do to a team or individual. We did however observe past instances of hazing at other universities. Many programs had not established hazing policies, which left them unprepared to deal with related incidences, and we certainly did not want this to occur at UC San Diego.”

Hazing was definitely a rising concern for the UCSD sports clubs department, and a little over five years ago we felt due diligence was in line for us. It was time to be proactive and solve the problem before it became a larger problem that would seriously affect participants, the program, and even the University. After several hours of researching other universities’ Hazing Policies, working with our Student Judicial office, and collaborating with our Intercollegiate Athletic Department to prevent hazing from all our sports teams, we came up with the following (see end of article).

In the fall of 2007, UCSD Sports Clubs’ hazing policy got hit with its first test when a team’s initiation party was reported to the directors. A complaint form was written explaining to the team their violation of the hazing policy and student code of conduct, as well as the decision to suspend the team for the rest of the 2007-2008 academic year. It was disputed by the team and brought before our student led committee for review. With a recommendation from the Sports Clubs Student Incident Review Committee as well as the evidence of a clear violation of the hazing policy, the suspension was carried out. This was a turning point for hazing and initiation rituals in our sports clubs.

“I was a senior sports clubs athlete, at the beginning of my season, when our team heard about the decision the sports clubs department made to suspend one of the other teams for hazing, I think it scared all of us. Not just my team, but a lot of the sports clubs. The news spread like wildfire, and we all started to re-evaluate our social activities. As my team examined them, we asked, is this considered hazing? If the answer came back, yes or even maybe, we revamped the activity or dropped it all together. I don’t know if all teams followed suit, but I can say that no one wants their season cancelled, and no so-called ‘tradition’ is worth that.”

We can never be 100% sure if our hazing policy is successful, but we can say we have not had any hazing incidents since then. In addition, we can always make sure that individuals involved in the program are informed and prepared for the repercussions of their actions. Each team member must sign an acknowledgment that they have read and understand the UCSD Sports Clubs Hazing Policy as well as the potential consequences (outlined in sports clubs handbook) for lack of compliance. This is tracked by our Sports Clubs online sign-up system, and no athlete is permitted to participate without signing such agreement. We feel our policy is clear and understood by the captains, coaches, and members of our sports club teams. For now, this is the best solution we have found, and it is our hope that such awareness has and will continue to decrease hazing throughout the sports clubs program. 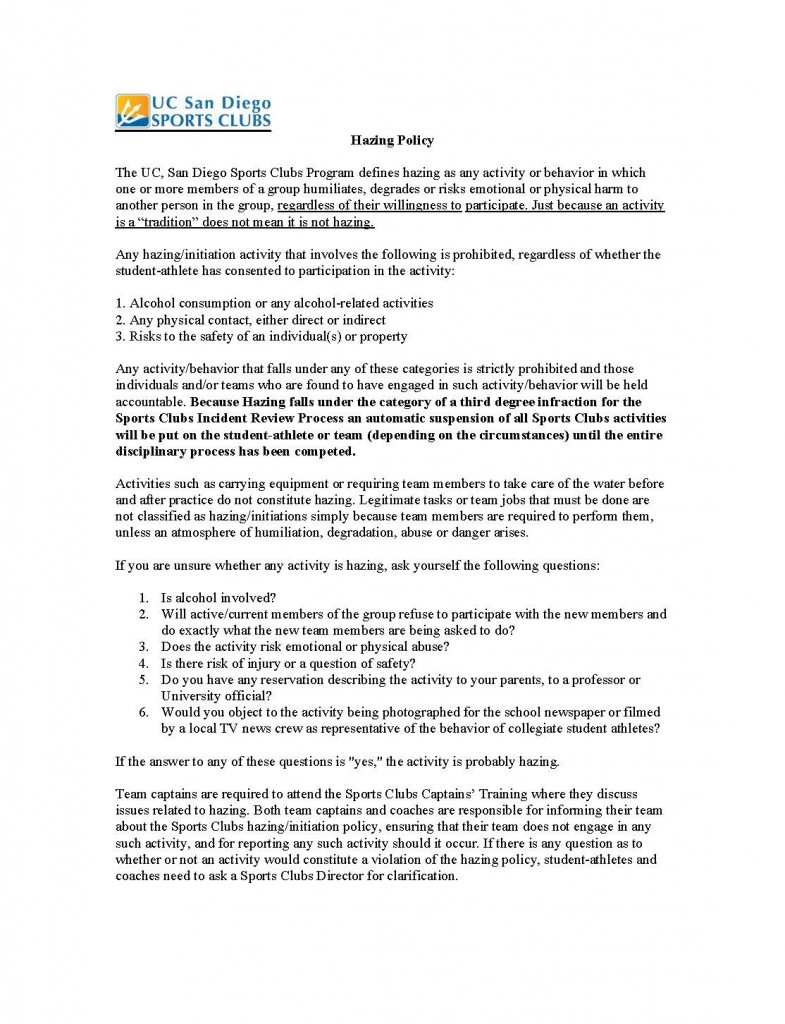 For more information on our Online Courses,